Home > Products > Action Pack #16: From the Land Down Under

I remembered being a little disappointed when Action Pack #1 debuted in 1997, even though I was only dabbling with ASL at the time (I wouldn’t really start playing ASL until 2001).  Sure, it had two geoboards, and some scenarios, but it didn’t have any new counters or rules and was a modest product, at best.  I bought it, but I wasn’t very excited about it.  Multi-Man Publishing–which was actually behind the idea, acting in the late 1990s as Avalon Hill’s in-house ASL content producers–didn’t seem all that excited about their own product, either, as they seemed to give up on the format once they took over ASL.  However, many years later, in 2007, MMP would finally publish a third Action Pack, and that re-started the series, as over the next 14 years MMP would publish 13 more Action Packs.

It was with this re-boot of the product idea that MMP finally realized the potential of the Action Pack, both as a way to satisfy hungry ASLers with more scenarios but, even more importantly, as a way to release new geoboards into the ASL world, a world that had seemed forever stalled at 52 and only 52 geoboards.  Every Action Pack except two introduced 1-3 more boards (one exception reprinted several long-out-of-print boards and the other exception was the unusual Swedish Volunteers supplement).  Many packs were themed by subject, while others offered a smorgasbord of actions. Some were the work of a single designer while others contained scenarios designed by numerous people. The potential of the Action Pack series was never in any single product but rather the cumulative and combined effect of all of the Action Packs together, greatly enriching the ASL universe.

That brings us to Action Pack #16: From the Land Down Under, the latest iteration of the Action Pack series.

Ah, the Land Down Under.

Do you come from a land down under?
Where half-squads die and newbies blunder?
OBA, can’t you hear the thunder?
You better run, you better take cover

Does this mean that all the scenarios are set in Australia (fighting dingoes and wrestling wallabies) or all feature Australian troops?  No, not quite. Actually it means that all of the scenarios are designed by Australian designers.  Australians have had a long and storied history of ASL scenario design dating back to the many classic ASL scenarios designed by members of the Paddington Bears ASL club in the 1990s. Most of the scenarios in AP16 are designed by veteran ASL designer (and generally nice guy) Andrew Rogers, with a few contributed by Simon Spinetti and by another veteran designer, Murray McCloskey of “Break Contact” fame.

Andrew Rogers also created the design for the geoboard (15a/b) that is included in AP16.  This 10″ x 16″ “gary-fortenberry-style” geoboard features a large but low and irregularly shaped hill mass stippled with huts, buildings, and palm trees.  It takes advantage of something that Your Humble Author has long (and probably a bit crankily) argued for:  using this style of geoboard to represent types/shapes of hills that  simply cannot be represented in a single 8″ x 22″ traditional geoboard.  The nature of the design makes it most suitable for reasonably well-populated PTO areas such as Burma, the Philippines, India, some islands in the Dutch East Indies, and perhaps also Okinawa.  It is probably suitable for some scenarios set in China as well.  The board is used in 4 of the 15 scenarios.

The scenarios are more or less equally divided between small, medium-sized and large actions, with the PTO scenarios in general tending to be rather smaller than the others. The marketing materials for AP16 claim that “all fifteen scenarios are designed with tournament play in mind,” but the large scenarios, which tend to feature a fair number of vehicles, may be too large for tournament play. The others are certainly suitable.

None of the scenarios feature OBA, Air Support or Night Rules.

AP160 (Carrier Hill) may be of interest to DTO fans, as it is a desert action featuring a British tank- and carrier-assisted attack on a group of Italians (including 5 guns) defending a hillock.

AP173 (The Bend), mentioned above, is the Hatten in Flames scenario. It uses the NE quarter of the map and features a German attack with 12 elite squads, two Panthers, and a couple half-tracks with Guns against 10 American squads and two tank destroyers. Another tank destroyer and a few more men show up as reinforcements.

AP172 (Hickory Lickin’) looks like it could be a dynamic scenario. It features an American attack with 13 squads and 5 Shermans against 9 German squads and an INF gun.  The Germans, however, get a platoon of elite infantry and two Mk IVs for a counterattack.

Big tanks on the East Front may make AP169 (The Beasts Have Arrived) popular. In this scenario, the Germans have a nasty attack force consisting of 11 6-5-8 Waffen SS squads and two gun-mounting halftracks, assisted by two Tigers and 4 Panthers that trickle in. The defending Soviets have 10 squads and a 57LL AT gun, but are reinforced by 2 IS-2s, a T-34 and a couple of eliete squads. Victory centers over three of four building/rubble locations.

Two scenarios–AP167 (All the King’s Enemies) and AP166 (Aussie Alamo)–take place near the village of Wau in New Guinea in early 1943. Wau is situated in the middle of nowhere, but it had an airstrip and the Australians created an airhead in the area, supporting a reinforced brigade entirely by air.  This became too much of a nuisance for the Japanese, who tried unsuccessfully to eliminate it.  The WWII history of Wau is little known but fascinating.  Your Humble Author had long wanted to design scenarios on the actions depicted here but was obviously beaten to the punch by these industrious Australians.

The scenarios of AP16 seem a bit schizophrenic, in that about half of them depict light infantry combat between small Australian, American, and Japanese forces, and the other half are very different, being armor-heavy East and West Front actions in which Tigers, IS-2s, Panthers, Fireflies and other toys are liberally handed out.  However, that means that there is sure to be something here to satisfy everyone.  There are definitely worse ways to celebrate getting a coronavirus vaccine than to play one of these scenarios against your similarly-jabbed friend. 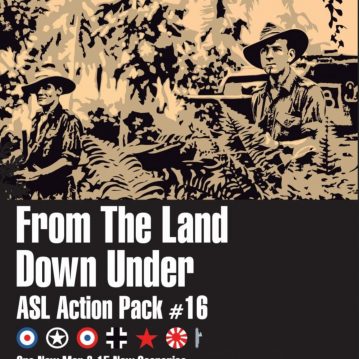