Contents:
Desperation Morale has not examined this product and cannot verify claims about its contents. However, it seems to include a historical map composed of 15 12" x 18" glossy heavy paper/light cardstock map panels, 8 scenarios, 1 1/2" countersheet (280 counters), and rules pages.

In 2019, Critical Hit released a new historical module dubbed “Tarawa: To the Last Man: Bloody Buariki,” an ungainly title that has led Critical Hit to also call this “Buariki-Tarawa” and “Bloody Buariki.”  The references to Tarawa may be confusing to some, who might think that this module recreates the same action as Heat of Battle’s Blood Reef Tarawa, MMP’s re-do of that module dubbed Blood Reef: Tarawa, or even Critical Hit’s own take on the same action, called simply Tarawa.

However, this product is none of those.  Tarawa is actually the name of an atoll that consists of a number of tiny islets.  The famous battle dubbed the Battle of Tarawa actually took place on Betio Island, the southwestern-most islet of the atoll.  The fighting represented here, however, took place on a different islet, Buariki, the northwestern-most islet.  It was essentially a mopping up operation by the 2nd Battalion, 6th Marines (2nd Marine Division) a few days after the main battle on Betio.  Some Japanese troops–150-175 or so–had escaped to Buariki and the Marines had to root them out in an action that took about a day.

If it seems strange to create such a large module for such a small and inconsequential tactical action, well, yes, it is.  Critical Hit apparently presumed that marketing it as a “Tarawa” module would attract interest from ASLers, especially those who like the USMC, amphibious operations, or the PTO in general.

This module presents virtually the entire islet of Buariki, and it always looks impressive when an entire island is displayed on an ASL map, though it is no easy chore assembling 15 12″ x 18″ map panels in the shape of a Starfleet insignia from Star Trek. However, the whole map are is not required for all scenarios.  Most of the map, though, is either water or undifferentiated jungle, so there aren’t a ton of interesting features here.

Noble Knight Games says that the module comes with 8 scenarios, though purchasers have input only 7 scenarios into the ASL Scenario Archives, so there is a discrepancy here.

The module also comes with a sheet of standard Japanese counters. 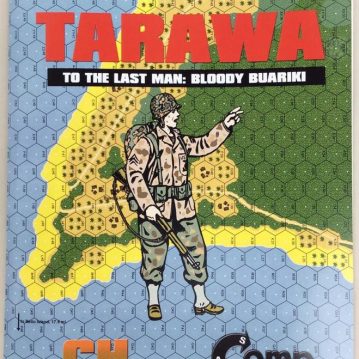