If you’re anything like Desperation Morale, you like your ASL products like you like your sandwiches: meaty. If so, Le Franc Tireur No. 14 certainly delivers the goods, as it is an ASL magazine with more than 100 pages of content, 32 scenarios, plus counters to boot. There’s a lot of there, there.

Le Franc Tireur is a French ASL third party publisher, but for many years, its products, including its eponymous magazine, have been printed in English. This is good, not just for native English speakers, but for ASLers around the world for whom English may be a second, or third, language. Still, the fact that much of the content is written by non-native English speakers, and all the editing is done by non-native English speakers, often means that the quality of the writing is not up to the standards of a publication like the ASL Journal. For some articles, this particular issue saw Italian writers translated and/or edited by French translators and editors in English!  Where have we seen that before?

Overall, an interesting mix of articles, although it would have been preferable to have more articles related to ASL play & tactics rather than historical articles. It’s odd, though, that there is no article explaining the included counters.

Now, what about those counters? There are two countersheets, one with 1/2″ counters and the other containing a mix of 1/2″ and 5/8″ counters. The counters are well die-cut and look nice, but some are a bit misaligned with the die and have very little bottom margin or, in other cases, top margin. As many third party publishers do these days, LFT uses color for infantry figures, AFVs, and planes.

The 1/2″ counters on the second sheet provide crews (including 2-2-8 crews), Italian and German SW in Italian colors, leaders and heroes.

Other 1/2″ counters include 10 Allied-minor colored SW (most of them British), 35 Soviet-colored SW (mostly of American Italian, British, and “Axis” derivation), and 5 0-0-6 counters of women wearing dresses (see below).

Most, though not all, of the 5/8″ counters are American, British, French, Soviet, German, Japanese, and Italian plane types. The artwork is admittedly very nice indeed.

The nature of some of the counters is explained in an “Italian Nationality Chart” that was meant to be included in Le Franc Tireur No. 14, but was not (at least, not for initial copies; it is possible that the chart was added to later copies sold after its absence was noticed). LFT has made that chart available as a PDF and has also included it in From the Cellar Pack 9.

There are no counters here for the Italian units that were raised by the Allies, or for those, like the elite 1st Battalion of the X Reggimento “Arditi” that fought for the Allies. There’s also not even a mention of the elite Alpini divisions or the Monte Cervino Ski Battalion or other elite Italian units.  Nor is there any mention of the many partisan units (often armed by the Allies) that fought against the Axis in Italy (though some appear in scenarios).

One might think that the counters here, given all the squad types and SW, might serve as an Italian infantry alternative to having the official Italian counters from Hollow Legions, but the absence of Italian concealment counters and 81mm MTRs pretty much precludes this. It’s worth noting that third party publisher Broken Ground Design decided to provide these counters, and some others, in a special counter supplement designed for use with this product; see here for details.

Whew. That’s a lot of scenarios in a lot of exotic and far-away places. For those ASLers who love ASL for the flavor and the off-the-beaten-path scenarios, this is a scenario mix sent straight from heaven. The scenarios are all in glossy color cardstock (but European paper length, not American paper length) and are attractive. Many scenarios are two-page scenarios, so make sure you don’t accidentally put only one page of a two-page scenario in your travel bag.

The scenarios skew towards the large in size. Slightly over half the scenarios in this product are large, while the remainder are equally divided between small and medium. Quite a few scenarios (8) use OBA, while three use Air Support. No scenarios use Night rules.

Scenarios FT238 (El Himeimat Ridge), FT235 (Once More Unto the Breach), and FT229 (A Push in the Bush), the latter not to be confused with the very different ASL News scenario of the same name, use desert boards and provide a relatively rare opportunity for DTO play.

A number of other scenarios offer situations interesting in their own right:

Note that only some of the scenarios in this product are described above. Speaking generally, Le Franc Tireur No. 14 has one of the most fascinating scenario mixes that have ever been included in any ASL product.  If all you like is standard German-Soviet East Front action, this may not be your cup of java, but if you are an ASLer who really loves seeing the width and breadth of what ASL can actually portray, well, this product is for you. So far the scenarios have not gotten enough play to determine how balanced, on whole, they are, but early playing has not yet brought up any dogs.  Hopefully such canines will remain far from this product, because scenarios this interesting deserve to be good. Let’s hope LFT has delivered on that promise. This product gets a rare provisional DM High Recommendation Tag based on the scenario content alone. With luck, its scenarios will be balanced enough to allow it to retain that tag permanently. 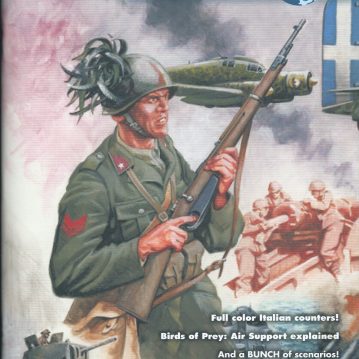