Ost Front 3 (hereinafter OF3) is the third in a line of East-Front themed mini-scenario packs from George Kelln’s Lone Canuck Publishing (Ost Front Pack and Ost Front 2: The Liberation of Minsk are the others).  The six scenarios in this mini-pack all take place in June and July 1941, in the early weeks of the Nazi invasion of the Soviet Union.  All the scenarios except one feature German Panzer divisions.

Mini-scenario packs offer publishers the advantage of not having to do as much work–in all stages but shipping–to design, playtest, and produce a product. Theoretically, they offer the consumer the advantage of being inexpensive, albeit at the cost of play value.  Because most players will not want to play at least some of the scenarios in an ASL product, mini-scenario packs are sometimes risky purchases, because the blackballing of even a few scenarios means that there are hardly any left to play. For some, the low cost of such purchases makes the risk an unimportant consideration.

All of the scenarios of OF3 have partially random orders of battle.  Essentially, each side in a scenario gets a set initial force, with a random “attachment group” to add to their it (or sometimes as reinforcements).  In this sense, OF3 resembles another mini-pack, Heat of Battle’s earlier Firefights!, which had random reinforcements (or the mini-pack Melee Pack I, which had partially choose-able forces).  The advantage to this approach is that it adds a bit of variety and replayability to the scenarios, as forces will vary with each playing.  The disadvantage is that such scenarios are much harder to playtest and tend to require a lot more playtesting than “normal” scenarios.  Both Firefights! and Melee Pack I, for example, ended up having many scenarios with serious balance issues.  Only time will tell if the playtesting for OF3 was sufficient to ensure adequate balance.

All of the scenarios in OF3 are large, but to leave it at that would be really misleading.  Rather, most of the scenarios involve small German forces pitted against very large Soviet armored or infantry forces (with conscripts making up the bulk of the latter).  Thus, though the theme of this mini-pack is the German invasion of the Soviet Union, the Germans may find themselves on the defensive more often than not.

One scenario has OBA; no scenarios use Air Support or Night Rules. In all of the scenarios, Russian Early War Doctrine (A25.212) from Hakkaa Päälle! is used. In all scenarios with Soviet AFVs, the crews of such vehicles are inexperienced. One scenarios has hidden simultaneous setup.

The scenarios are thus mostly of the “Russian horde” variety, fairly or unfairly, pitting large masses of poorly trained Soviet troops against much smaller, but well-armed German forces.  Such scenarios tend to have an element of diciness to them, in that the much smaller force is more vulnerable to the effects of a particularly unlucky Sniper role, weapon malfunction, etc., so players should keep that in mind.  The good aspect of such scenarios, aside from the intrinsic interest in playing with asymmetrical forces, is the tension both sides can feel while playing:  one side has many troops that can’t do anything well and will suffer massive casualties, while the other side is loaded for bear but very brittle.

The scenarios are slightly long, all being 7-8 turns in length.  Half of the scenarios require the use of at least one ASLSK geoboard.  The boards required to play all the scenarios include: 4, 16, 18, 19, 43, 57, 66, q, t, v, and x. Five of the six scenarios have at least one overlay. Lone Canuck scenarios infamously tend to be overgenerous in giving players support weapons.  That is not the case in OF3 for the Soviets, but it certainly is for the Germans.  who average about one SW per squad in this pack (!).

Because of the random aspect and because the Germans often have much smaller forces, these scenarios may not be suitable for tournament play.  However, they might well be fun for a casual afternoon of ASL mayhem. 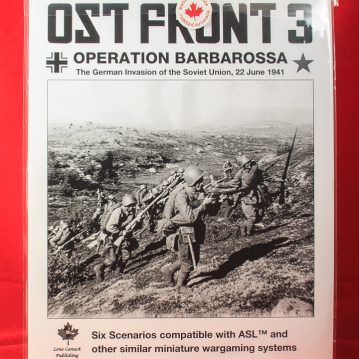