Counter Attacks! 2 (CA2) is the second in a line of Critical Hit scenario packs designed by Brian Martuzas with the goal of using CH-designed boards.  It is probably useful to review the commentary for Counter Attacks! 1 before reading this commentary, as many of the comments there are also applicable to this product.  The theme for CA2 is Hungarians, with most of the 10 included scenarios set in the defensive fighting in Hungary in 1944.

CA2 comes shrink-wrapped in a folder; there is no box or ziplock, so players will have to purchase one or find some other way to store the contents once opened.

CA2 comes with two pages of rules, though most of the second page is taken up by a super-lengthy “optional rule” for “bayonet charges,” which virtually no players will ever use.  The first page lays out the characteristics of some of the counters included in the product.

The counters included with CA2 are primarily duplicates of already existing Romanian and Hungarian counters, along with a few Soviet counters.  There are some new counters, including “assault engineer” counters in the style of Valor of the Guards, as well as counters for the St. Laszlo Parachute Division (not really a parachute division, despite its name).  These units appear as 5-3-7 and 4-4-7 elite supermen with a broken-side morale of 8, which is amazingly generous for soldiers of a unit that primarily did rear guard duty and hardly ever fought as a division.  Although Brian Martuzas goes on at length about how great it is that the Hungarian figures on the MMC counters now have “their appropriate M18 and M35 Austrian Stahlhelme,” no one else is likely to notice or care.

CA2 comes with four “geoboards,” but there is a reason the word appears in quotation marks, because these boards are not geoboards in the sense of either old mounted boards or the new ASLSK-style unmounted boards.  Rather, these could more accurately be called “assemble-them-yourself” geoboard kits, because all that is provided are 9″ x 12″ sheets of thick paper/light cardstock (equivalent in thickness to overlays) with half-maps printed on one side, surrounded by a white strip.  This means that each half-map has to be cut out with scissors or a rotary blade cutter in order to use the map, and even then one will have flimsy paper maps rather than mounted or unmounted cardboard maps.  This is map-printing at its very cheapest (though one will notice that there are no savings passed on to the consumer; this product debuted at the eye-gouging price of $89.95).

If that weren’t bad enough, the maps are not printed correctly.  Lengthwise, they are basically okay, but along their narrow axis, they are variously between 1/16″ and 1/8″ shorter than official maps (which are 8″ wide).  This means that they won’t line up properly against official maps when two narrow sides must abut.  It is so easy to measure a prototype map that it is hard to understand how this mistake (which appears to be common to such paper maps in all Critical Hit products released around this time) was ever made.  Well, perhaps easy to understand how, but harder to understand why.

Three of the four maps (CH1, CH2, and CH4) are not original, but actually reprints of Critical Hit maps that appeared elsewhere. CH1 appeared in Gembloux II: The Battle of France 1940, while CH2 appeared in A Few Rare Men.  CH4 appeared in Bulge Pak 1.  Ironically, the original versions of all of those maps had their own printing issues.

W5 is a winterized board (boards W1-14 appeared in Fire & Ice: Finland at War, 1939-1945).  It is basically a frozen river board, depicting relatively open rural terrain bisected by a large ice-covered river.  The winter graphics are okay but not spectacular.

Three of the 10 scenarios call for the use of CH1.  CH2 and CH4 are each used once.  W5 is used twice.  Two other types of boards are also called for.  Seven scenarios call for the use of various x-series boards from the Sweet 16 Geo Board & Scenario Collection, which is another Critical Hit product related to Brian Martuzas.  That product, which garnered a CONSUMER ALERT WARNING from this website, was basically a highly-priced collection of derivative “alternative” versions of official geoboards 1-16, done in the same awful paper “do it yourself” style of the maps in CA2.  Thus players will either have to purchase that product in order to play these scenarios (and this website has cautioned against doing so), or swap out the x-series boards for their official equivalents, which CA2 assures us that players are able to do, though it is doubtful that any of the scenarios were playtested with those boards (although, since no playtesters at all are listed, how much any of these scenarios received any playtesting at all in any version is very much open to question).  Two more scenarios call for the use of x-series Winter boards, which come from another product, the Sweet 16 Geo Board Collection Winter, which simply features those same 16 boards with winterized graphics.   This serves only a cosmetic purpose and there is no reason why the regular x-series boards would not do as well.  No scenario calls for any official board.

Designer Brian Martuzas is known for throwback style scenarios that tend towards the large and long.  The scenarios here mostly fit that bill, though they are a bit shorter than is normal for him.  Every single scenario is large or very large in size; there are no medium or small scenarios.  Two scenarios use OBA, while one scenario utilizes the Air Support rules.  There are no night scenarios.  Generally speaking, the scenarios are light on SSRs.  The scenario cards, which use red ink as well as black, are generally of higher physical quality than Critical Hit has had in the past.

The scenarios themselves tend towards the simple or even simplistic.  In almost every scenario, one player sets up on board and the other player enters from one board edge and tries to take a few specified locations such as buildings or bridges.  This, combined with the fact that the scenarios are highly repetitive in which boards they use (especially boards x4, x16, and x10; x16 is used in almost half the scenarios) and the lack of flavor SSRs, give many of the scenarios the same feel, even if the specifics differ a bit.

Few scenarios jump out from the mix.  Brian Martuzas does try to call attention to one scenario, CA#10 (Help from Benito), which features an attack by Hungarian and Italian troops, followed by a Soviet armored counterattack.  However, this scenario appears to be mostly fictional.  Martuzas writes that he read in a book about a small Italian unit attached to the Hungarians as it moved to the front, but that it never stated that the Italians did any fighting as they were transported with the Hungarians.  This did not deter Mr. Martuzas!  “It is my opinion,” he asserts, that these Italians were not along “just for the ride.”  So Martuzas states that he included the Italians in the scenario “because it adds flair.”  He then dares the reader to prove him wrong:  “Historically incorrect?  Then I welcome any evidence to refute my theory.”  In other words, he just makes stuff up, then dares the players to prove him wrong.  Not exactly the way to inspire confidence in the history behind a scenario (the more so because the book he used as the source for many, perhaps most, of his scenarios is a fairly bad self-published book).

Theoretically, fans of East Front action and devotees of Axis Minors might be interested in this product.  However, it has those crappy paper maps and requires the ownership of a very expensive, very crappy product in order to play the scenarios herein.  And this product, at $89.95, is priced nearly triple what it should be selling for.  If you can find this for $35 or less, it might be worth trying.  Paying any more would be wasting money. 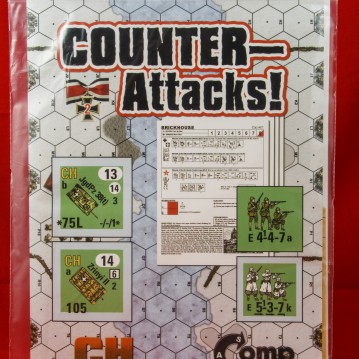