Deluxe ASL is a partial combined reprint of the original two DASL modules published by Avalon Hill in the mid-1980s, Streets of Fire (1985) and Hedgerow Hell (1987).  The reprint was almost inevitable after MMP decided it would un-abandon the long-abandoned DASL niche by publishing the Winter Offensive Bonus Pack #9 in 2018.

DASL was an attempt to fuse ASL with miniatures, primarily by creating huge boards with 2.2″ hexes that would be compatible with 1/285 scale miniatures. As Desperation Morale has explained in detail, the idea of Deluxe ASL was one that never really caught on with the ASL world, perhaps because DASL boards were so large and cumbersome, perhaps because the number of hexes on DASL boards is so small that DASL scenarios tend to lack maneuver and mobility (more on the history of DASL here).  Avalon Hill stopped producing new DASL boards after its first two forays and allowed its miniatures marketing arrangement with GHQ to lapse.  A misprinted (but later corrected) set of overlays in the 1990s and the occasional DASL scenario were the only official DASL materials to follow.  Third party publishers did not do much more. In the decades since DASL was introduced, Bounding Fire Productions released one DASL geoboard, and Heat of Battle another, while Le Franc Tireur released a substantial DASL module. But for the most part, third party publishers, like Avalon Hill and later MMP, just published the occasional DASL scenario.

The relative lack of interest in DASL resulted in some surprise when MMP seemed to be recommitting to DASL in the late 2010s. DASL enthusiasts were enthused, while other ASLers were less excited, and some (including, it should be noted, Your Humble Author) were vocally opposed to the idea, especially given that important core modules such as Croix de Guerre and Hollow Legions had yet to be reprinted.  But MMP wanted it and Deluxe ASL was put on pre-order, where it languished for some time due to a relative lack of interest.  Indeed, even as MMP was preparing to send its Deluxe ASL materials to the printers in late 2019, it was still trying to scrounge up the remaining pre-orders: 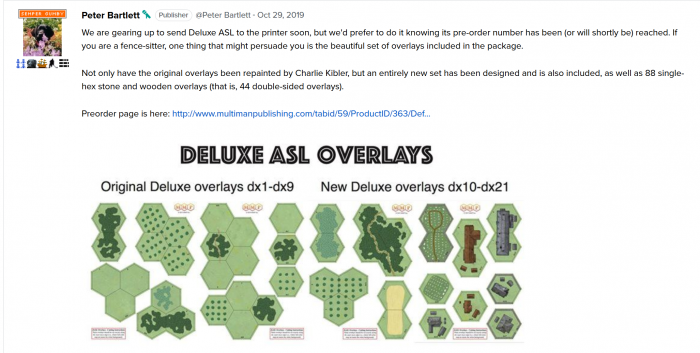 As a product, Deluxe ASL certainly has advantages over Streets of Fire and Hedgerow Hell and is the better product to get for someone interested in getting into DASL.  Deluxe ASL does not contain all the components that Streets/Hedgerow had, so it is not a complete combined reprint.  Specifically, it is missing the “AFV Cards” that appeared in both modules, which allowed players to keep track of special rules for and status of the vehicles they had in their scenarios.  The cards proved the least popular part of these not very popular modules and their abandonment by MMP was a good idea.  Deluxe ASL also does not contain the small countersheet that appeared in Hedgerow Hell.  The counters on the front of the sheet were markers designed to be used with the AFV cards, while the reverse side of the sheet had markers related to building control.  The absence of this sheet is not a loss, either.

What Deluxe ASL does contain from Streets of Fire and Hedgerow Hell are all the boards (a-h) and scenarios.

The original Streets of Fire and Hedgerow Hell boards were mounted 11″ x 26″ geoboards that folded in half. The mounting, combined with their size, made them quite heavy, while the half-folding meant that the boards were also bulky and harder to store.  The new versions of these boards are printed on cardstock, like other MMP ASL boards are, and tri-folded, which makes the new boards both much less heavy than their predecessors as well as less bulky.  With the trifold, the DASL boards (when folded) are the same length as standard folded geoboards, and only slightly wider, meaning that they are much easier to store–indeed, many ASLers will be able to store their new DASL boards in the same container(s) that they store their standard geoboards in, making the new boards far more convenient and user-friendly than the old boards ever were.  This is the single greatest advantage that Deluxe ASL offers over its predecessors.  Of course, the size of the new versions is still the same size as the old versions, so these boards will hog all available table space just as the old versions did, but that’s what they were designed to do.

The Streets/Hedgerow boards were also hand-painted, like all of the official ASL, but MMP abandoned hand-painted boards some time ago in favor of (good) digital artwork, so the original DASL boards were recreated digitally (by the same artist who handpainted the original boards in the 80s, ironically).  The Deluxe ASL artwork is generally fine, although there is some weird texturing going on in the open ground hexes (which, however, you won’t notice unless you look carefully), as well as various splotches of darker or lighter miscoloration, which was presumably deliberate but sometimes looks accidental.  The buildings remain the most nicely rendered artwork, with great detail. The boards also retain some of the driveways and paths (for aesthetic purposes only) of the original Streets of Fire boards, although rendered faintly enough that some observers might not even notice them.

The artwork does retain one of the minor flaws of the original artwork, which did not resize any of its brush, marsh and woods symbology to fit the expanded scale. This was not really an issue regarding brush and marsh terrain, as the little reed and scrub images don’t look out of place even with the upsized scale, but it is an issue for woods  depictions, as woods in DASL appear to be filled with teensy-weensy trees instead of trees that are appropriate in size to the scale of the 2.2″ hexes.  But this is a matter of aesthetics only and of course has no effect on gameplay.

As with the original products, the city boards in Deluxe ASL are of far more utility than the rural boards, which were intended to represent the hedgerow country of Normandy and are thus all covered with hedges, which limits their ability to be representative of rural terrain elsewhere.

Unlike the original DASL modules, Deluxe ASL also comes with 8 sheets of overlays designed for DASL-sized hexes.  These include new versions of the wood/stone rubble overlays that originally appeared in the ASL Annual as well as new overlays made for this product, which represent the only entirely new components in the product.  There are four rubble overlay sheets, each with 11 one-hex rubble overlays; these are not actually needed in DASL, as rubble counters could be used just as in regular ASL, but in DASL they don’t cover the whole hex and could be “lost.”  The other four sheets have 21 terrain overlays including 3 woods overlays, 3 orchard overlays, 2 open ground overlays, 1 woods/brush overlay, 1 woods/open overlay, 1 woods/open/orchard overlay, 1 brush overlay, 1 grain overlay, 2 cemetery overlays, and 6 building overlays. Interestingly, there are no hill overlays.

In addition to those scenarios, MMP has also reprinted 20 other DASL scenarios from a variety of sources (you can see a list of the scenarios and where they originally appeared here). Of these 20 scenarios, 16 have been “updated” in some way.

Deluxe ASL includes no new scenarios, but 38 scenarios, even if reprints, represent a significant amount of play value.  A lot of these scenarios have stood the test of time and some are considered classics.

Of the 38 scenarios in the product, 21 of them are large or very large in size, while around 11 can be considered medium-sized and only 6 small in size.  This reflects the nature of DASL scenario design, which tends to compensate for the lack of space and maneuver by giving players large numbers of units to throw at each other in close quarters.  Despite the tendency towards the steroidal, only 7 of the 38 scenarios feature any OBA, perhaps because in a scenario in which there are relatively few hexes, OBA can often have an outsized importance.  Three scenarios use Air Support rules, while two scenarios require the Night rules.  One of the scenarios, DASL 21 (Headhunting for Bloody Huns), is an airdrop scenario.

Deluxe ASL is, in a sense, an experiment. It will be interesting to see if it spawns a significant new interest in DASL that might open roads to new DASL-related products being released to support DASL, or if ends up suffering the same fate as Streets of Fire and Hedgerow Hell, more of a dead end than a broad new thoroughfare. 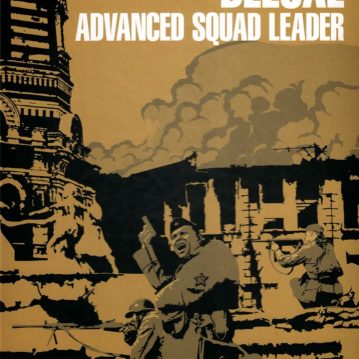 Streets of Fire board vs Deluxe ASL board, image courtesy of Luis Calçada