Yanks was a major addition to the ASL series, introducing the Americans in all their glory.  The complete ETO U.S. order of battle is included (Important: USMC, landing craft, and early war U.S./Filipino troops appeared originally in Gung Ho and, later, Rising Sun), as is Chapter E, the “miscellaneous” rules chapter for ASL (later included in the 2nd Edition ASL Rulebook).

Yanks is one of the few ASL core modules that MMP has never reprinted, primarily because they had so many copies left over from Avalon Hill’s demise that for many years there has been no need for a reprint.  By 2014, a new edition is sorely needed, however.

2nd Edition comments:  Did Desperation Morale really spend so few words describing one of the seminal ASL core modules?  Shame on us; we should be banished until the last half-turn of Hell. Let’s make up for that now that MMP has released a 2nd Edition of Yanks, almost 30 years after the first. We can start with that gap–a gap more than long enough for a gamer born in, say, 1970, to have become a grandfather in the interim.

To do that we need to enter our Way Back Machine and go back to the 1980s, those glory years when board wargaming, if not still in the fad stage of the 1970s, was still a much more common hobby than it is today, and when ASL was debuted by the company known as Avalon Hill.  For those wargamers-come-lately, The Avalon Hill Game Company was not just a wargaming company, for many years it was the wargaming company, having started the hobby in 1958 with the publication of a game called Tactics II.  Like many wargaming companies, it was better at producing wargames than being a commercial business and ran into hard times, causing it to be taken over by creditors after only a few years.  One creditor, Monarch Office Services, a printing company, would become the effective new owner of Avalon Hill until its demise in the late 1990s.

Having a printer own a game company gave Avalon Hill a couple of unusual advantages over other wargame companies (which eventually began to emerge in the late 1960s).  Key advantages included unusual flexibility in printing, including the ability to print very large print runs, as well as the warehouse space to store all of those games.  As a result, Avalon Hill games were typically in print far longer than the games of any of its rivals.  Consequently, when Avalon Hill printed Yanks in 1987, it printed a lot of copies of Yanks. The typical mid-80s print run for an Avalon Hill game was around 25,000, but ASL was popular, so its number might well have been higher. By the late 1990s, however, those copies had finally begun to run out, so Avalon Hill did another print run (with no changes from the original version), allegedly a fairly large print run (according to the memory of MMP principle Brian Youse, the print run was around 10,000).

Little did Avalon Hill know at the time that its days were numbered.  In 1998, Monarch sold Avalon Hill to giant toy company Hasbro.  The rights of a few games returned to their owners and Hasbro acquired the rest, to reprint a few and consign the rest to oblivion. ASL seemed like it too might be so consigned, but MMP–who had been serving for several years as the designers and developers of ASL materials for Avalon Hill–were able to reach a miraculous licensing deal with Hasbro to continue creating and publishing ASL products under license, with Hasbro getting a cut.  As part of this deal, MMP was able to sell Avalon Hill’s remaining stock of ASL products (and a few others), including those stacks and stacks of Yanks. Did we mention stacks?

So, from the end of the 1990s and well into the brave new century, copies of Yanks slowly came off the warehouse shelves as they were sold.  More than 20 years after Avalon Hill released Yanks, one could still buy a brand spanking new copy of it from MMP.  It was not until January 8, 2009, that Brian Youse was able to give the news that “It is with great, well, shock, that we have to announce that Yanks, the American expansion for ASL, is out of print. Ten years and 8 days after we signed our contract with Hasbro. I, personally, never thought we’d sell out of Yanks. I am still shocked.”

Naturally, as soon as Yanks went out of print, ASLers started clamoring for Yanks!  However, reprinting Yanks was no easy task for MMP, as none of the original artwork had survived–not even the photoplates. Everything would have to be recreated from scratch.  Well, much of it.  The Chapter E rules had long since been added to the 2nd edition ASL Rulebook, while the geoboards had been redrawn as part of MMP’s project to do new digital versions of all the original 52 geoboards released for ASL.  However, that still left the many pages of Chapter H, the scenarios (and any new scenarios that might be added), and many countersheets worth of counters.  So Yanks was stuck at the end of a line of ASL reprints, a line where it languished until the late summer of 2016, when the 2nd edition of Yanks finally debuted, nearly 30 years after its original debut.

To the extent that MMP has had a reprint strategy, it has been to reduce the number of “core” modules required by bundling up their contents into fewer modules and to bulk up those modules in other ways when possible. Gone are the tiny “core” modules with one board, a countersheet, and a handful of scenarios.  The new Yanks absorbed Paratrooper (which itself had already absorbed other ASL items by then) as well as the boards from Croix de Guerre and one board (46) from Action Pack 2. It also absorbed a number of older scenarios.  Thus despite no longer having Chapter E, the 2nd Edition Yanks is a much bigger and more impressive product than the already substantial first edition.

Yanks no longer comes with Chapter E rules but does still come with the Chapter H (i.e, AFV/Gun notes) for the Americans, or at least the non-PTO parts of the American OB.  As with all MMP re-dos, the rules pages were changed to have a slightly larger font, which really improves readability over the original. Any errata noticed in the original was also corrected, while “See also U.S. Vehicle Notes X, Y, Z” directions were added for all AFVs and Guns with relevant multi-applicable vehicle notes–again, much more user-friendly than the original.

The only complaint that one can make about the new Chapter H notes is that they do not significantly revise the notes for U.S. halftracks (particularly about what SW they have and how those can be removed).  These notes are very confusing, so much so that entire play aids have been made trying to explain them more clearly, including one that appears in Special Ops Issue #3.  It would have been nice had some of this clarity been added to chapter H (and perhaps the play aid included as well).

Naturally, Yanks also comes with a lot of counters for the Americans, as well as some other stuff.  It should be noted right up front that American counters have not been treated very well in ASL history, suffering from everything from poor die-cutting to color shifts.  It is therefore extremely pleasing to see that the Yanks counters are of fine quality, with excellent die-cutting and all the right colors. Moreover, as has been the recent MMP practice, information on the counters has been made larger, where possible–with the key exception of AFV/Gun names, which are still way too small, especially for aging gamer eyes.

Sheet 1 is a sheet of 1/2″ counters that includes American squads and half-squads.

Sheet 2, another 1/2″ countersheet, continues the half-squads and includes crews, SMC, SW, Concealment markers and a few other markers.

Sheet 6 is a mixed countersheet, half 1/2″ counters and half 5/8″ counters. The 5/8″ counters include additional Chapter E markers, odds and ends (such as Crest Status markers and Pillbox counters), and some German, Finnish, and Soviet 1/2″ counters, which are a bit mysterious. These include 8-3-8 Waffen SS squads and half-squads, a Finnish 8-0 leader and 11 Finnish concealment markers, and two Soviet ATRs.  There is no explanation for these counters.

Yanks also comes with 8 8″ x 22″ geoboards (16, 17, 18, 19, 24, 40, 41, 46).  Unlike the original Avalon Hill Yanks boards, which were mounted, these boards are all unmounted (i.e., printed on thick cardstock), as has been the MMP practice for over a decade now. Though some grognards may still grumble about the disappearance of the mounted mapboard, the bulk of the ASL community seems to have been won over to the newer style of board, which is more lightweight, has more consistent artwork from board to board, is more directly mateable, and which is also less expensive.

The 2nd edition of Yanks includes the four original boards from Yanks, as well as the additional boards from other products as described above.  Because the artwork for these boards has been known for years, thanks to these boards all having been available for sale from MMP, there is not much to say about the specific boards themselves.  It will suffice to say that the artwork is crisp and bright.

This leaves the scenarios, of which 2nd Edition Yanks has more than five times the quantity that the original Yanks did.  That’s a mess of play value. Yanks includes the 8 scenarios designed for it, as well as the 8 scenarios from Paratrooper. It also contains a variety of Alphabet, G- and T- series scenarios originally appearing in various issues of The General Magazine.  Additionally, it has a number of American-involved scenarios from issues of the ASL Annual and three total from Action Pack 1 and Action Pack 2. There are 41 scenarios in all.

Now, that is technically what is called a shit-ton of scenarios. One caveat does need to be added: all of these scenarios, every last one of them, are from the early years of ASL. None of them were originally published in the 21st century.  As “old style” scenarios, this means that they tend to be long and don’t play as fast as modern ASL scenarios do.  This doesn’t mean they are bad scenarios, of course.

The scenarios whose original versions had errors in them have had the errors corrected. However, one scenario, 81 (Gavin Take), had some new errata added, unfortunately. A corrected version of this scenario can be downloaded from the MMP website, while MMP included a corrected printed version with the ASL Journal Issue 12.

In addition to scenarios that originally had some mistakes, some other of these scenarios turned out to have been less well balanced than originally hoped.  For several of these reprints, then, MMP has included “balance errata,” designed to improve the play balance between the two sides.  This is always commendable and appreciated.  On the 2nd edition scenario cards, MMP notes which scenarios have been “updated,” though they do not distinguish between the two different types of errata that might have been incorporated.

The scenarios are an excellent mix of small, medium, and large actions, so everybody’s tastes in terms of meatiness or needs in terms of time can be accommodated. Eight of the scenarios have OBA, one uses Night rules and one has Air Support.  Scenario 25 (Gavin’s Gamble) is a river crossing on assault boats. Scenario 201 (Hunters from the Sky) is an Air Drop scenario.

Yanks, 2nd Edition, is an expensive product, certainly.  But there is a great deal of value here, whether measured by physical components or play value. For someone getting into ASL, this ought to be one of the earliest purchases.  And even grognards who have the first edition of Yanks should think about upgrading with this fine edition. 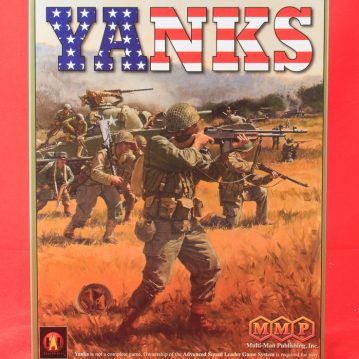